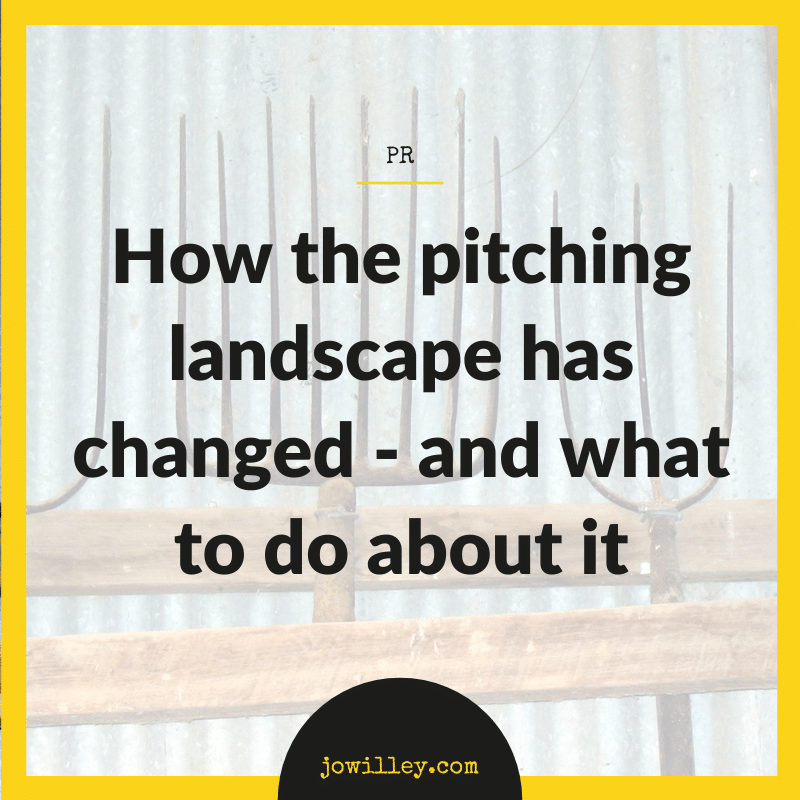 For the decades I have been working on national newspapers, three questions I always get asked are how best to pitch to journalists, how do I want to be given a story, what makes me write that story? It is the part of the Hacks (journalists) Vs Flacks (public relations pros) relationship which puzzles both sides the most.

This relationship has always had a love/hate element to it – and is something I have written about on my website blog. We both rely completely on one another to do our jobs properly. Yet for some reason there has always been a certain amount of friction.

But without each other, what do we have? Journalists, in the main, need PRs to bring their attention to brilliant stories they may not otherwise come across. PRs want to get great coverage for their client, and nothing gives “third party”, independent endorsement than having it splashed across the pages of a national newspaper.

But pitching is (unfortunately for PRs) an inexact science. Just like how we drink our tea, how we like to be approached about a story differs for individual journalists. Which is why I know it is such a nightmare for PRs to navigate. What I like, others might hate.

Some only want an email. Others are happy to take a call. Some prefer being contacted via Twitter (never understood this, personally, but to each their own!).

When I was Health Editor at the Daily Express, I preferred email purely because I was ridiculously busy, writing anything from four to 10 stories a day including at least one or two potential front pages.

But I always tried to answer the phone when I could and, if I was really up against it, would explain that and ask for an email. Although I always did my best to be as polite as possible, those calling at deadline would definitely get a grumpier response (never call on deadline, people!).

A changing landscape for changed times

This whole pitching “issue” has once again come into the spotlight after PR Week covered a survey of 200 national news and lifestyle journalists conducted by GingerComms and its polling arm Perspectus Global.

It revealed that, although the media landscape has changed dramatically in recent years, PR doesn’t seem to have caught up when it comes to pitching.

In fact, the journalists questioned highlighted a number of areas where PRs are still missing the mark when it comes to selling-in and want the industry to adapt how it pitches to take into account how work patterns have completely changed in newsrooms and just how time-poor most journalists are these days.

I have shared lots of my pitching insights in my Top Tips videos , including Video 1: Pitching , which gives the lowdown on how PRs can overcome their fear of contacting journalists, understand who to pitch to and when, and what they need to do to ensure they’re not annoying journalists and are instead giving them something great they will want to cover.

The Email or Call debate rages on

The survey also found that one of the topics I have covered in my videos – whether to Email a story or sell it in over the phone – is still a major issue.

It found that the majority of journalists find phone call pitches infuriating, with nine in 10 preferring PRs to pitch via email instead.

My Top Tips Video 5: Email or call?  gives some insider insight into how you can navigate the tricky decision with confidence.

(Quick Tip – this is a time thing. It’s easier to read an Email and judge its news value quickly – I’m talking a few seconds – yourself than have to go through the horrors of a phone pitch that isn’t hitting the mark or that you know you could have digested yourself in less time. We make decisions on stories in seconds, which is why your Email pitch has to be spot on… See Video 6: Nail Your Email , which gives more sneak peaks into how to get an Email pitch right and ensure your story read by journalists every time.)

The biggest bugbear for 85 per cent of the journalists questioned for the survey was being pitched irrelevant content by PRs which has no bearing either on what they – or their publication – covers.

This is covered in my Top Tips Video 2: Building Relationships with Journalists which talks about how, by getting to know the journalists at the outlets you want to target for your clients, you will ensure you are providing them with content they will want to use.

Another pet hate highlighted by the survey was being sent over-branded press releases which don’t contain anything newsworthy (59 per cent of respondents) and being sent follow-up emails or calls to ask whether the story will be used after an initial pitch (49 per cent).

My other videos all reveal some key insights into navigating these issues – how to write a great press release which isn’t just a “PR puff” using impactful storytelling, how to craft brilliant “secret weapon” quotes that actually get used and how to develop engaging key messages that can stand up to scrutiny from even the hardest-nosed news hound.

Other frustrations for almost half of those questioned (49 per cent for both answers) was being pitched stories that have already been published by another outlet, particularly between rivals, and expecting too much client branding in the copy.

No one likes old news, right? And every journalist is always on the hunt for a brilliant exclusive. So pitching old news already used by a rival is just double bad form.

Finally, the survey showed that the average news journalist receives about 63 pitches from PRs every day with less than a quarter (23 per cent) of them containing anything of interest to them.

That is why I am always talking about story creation and storytelling and getting to know who you are pitching to. Telling a brilliant story for your client in your press release and making sure the right journalist gets eyes on it is a winning combination.

Pitching is the vital cog

So, what is the take-home from this? Pitching is still the most vital “cog” in the relationship wheel that keeps the PR and journalism world turning so beautifully.

It’s great this new survey has once again highlighted its importance and what is – and isn’t – working for journalists.

Get in touch and find out how I can help you ensure you have an amazing story to tell, hone a strategy to make it fly and help you hone your pitching skills so you can stand out from the crowd and get your stories read and covered.