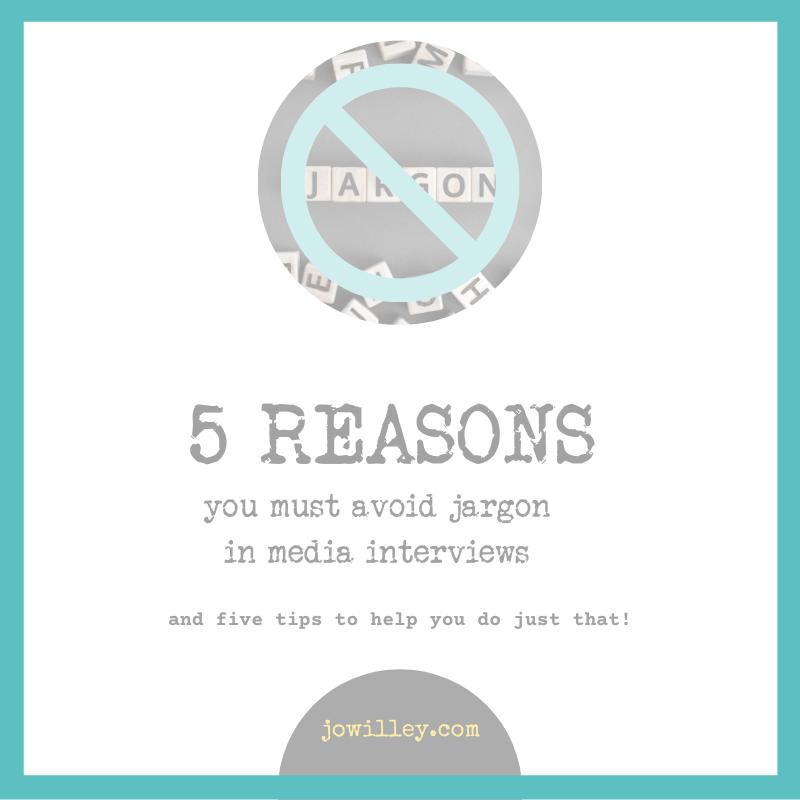 Every industry has its own jargon, which can sometimes sound like its very own language to outsiders. Newsrooms are littered with it.

If I said: “Can you re-nose this copy with a new peg and cut it for a sidebar.”

Or: “Back Bench want your story as the splash and turn, it’s on the flat plan.”

Or: “You need to file we’re about to go off stone.”

I’m guessing you won’t fully understand what I’m talking about, if at all.

Newsrooms are noisy and busy with people working to tight deadlines and dealing with what can often be constantly changing angles. Using common newspaper or TV terms which everyone in the industry understands cuts out the chance of misunderstandings without having to spend precious time on detailed explanations.

But when it comes to communicating to people outside a specific industry, whether that be a journalist or to the general public, the cool acronyms and techy terms HAVE to go.

This is particularly vital in the healthcare industry where I do a lot of my work. Often-complex scientific, technical and health-related language is second nature to those I work with.

Scientists, specialists and executives spend their days talking to colleagues or peers in what to most people would be technical gobbledygook, their conversations littered with words rarely used and barely understood by the general public.

And the public already suffers from massive information overload. We are constantly being bombarded 24/7. Using any language which prevents people from quickly grasping what you mean and are trying to say will result in messages that are quickly forgotten – along with you (after all, you’ll only be remembered for your last soundbite).

So, when it comes to communicating your exciting news – your work – to journalists you have to forget about academic, scientific, technical terms. They know you’re brilliant at what you do and that you know what you’re talking about. That is why they are talking to you in the first place.

Journalists want people who are experts in their field to explain the significance behind the news and explain it in a way they can then go on to debunk it for the general public. Journalists WANT you to be clear so they can quote you and use your expertise to help tell the story.

Making something simple isn’t dumbing down a topic, you, or the organisation you represent. This is about using clear, understandable, relatable language so your message reaches as many people as possible. Because after all, what is the point of talking to a journalist and their readers, viewers or listeners if no one understands what you’re saying?

Here are the five reasons we believe no one should ever use jargon when speaking to the media (or in fact anyone outside their own industry!):

1)    A lot of people, particularly in healthcare and science, feel safe with complexity. But failing to ditch jargon can have a far more concerning consequence – it also leaves what you say ripe for being misunderstood. If journalists have to decipher complex data and information to uncover the nub of a story, if the general public is bombarded with difficult terms and even words they may not have heard before, you face causing a PR nightmare if they then get the wrong end of the stick and an inadvertently inaccurate story goes viral.

2)    You might be misquoted. Or not quoted at all. Journalists won’t use quotes their audience can’t or won’t understand.

3)    An audience switches off when they are being spoken to in complex language they are unfamiliar with or don’t understand. Your message and your “news” will be lost.

4)    You are doing yourself and the organisation you work for a disservice. You – hopefully – have a great story to tell which is why you are reaching out to the media in the first place. If you get interest from a journalist, it is a fantastic opportunity to showcase both you as an expert in your field and competent spokesperson, AND your organisation.

5)    Journalists want stories. That means, during a media interview, you need to become that storyteller. Using jargon can make you “unusable” to the media. And your story has been lost.

That’s all well and good. But what do you do when you work in an industry that is heavily mired in jargon and you are speaking to the media?

Here are my five top tips:

1)    Think about how you would tell your partner/spouse or friend down the pub about the topic you need to communicate. What words would you use instead of more complex ones? How would you explain the real gist of the story in just one sentence? Presume the person you are wanting to reach knows absolutely nothing about the subject and won’t understand technical, medical or scientific terms.

2)    Know the specifics of the topic you’re going to discuss inside out. And that means being prepared. If you get caught out by a specific line of questioning because you don’t know your stuff you might panic and go in to default jargon mode for “safety”.

3)    Think about what a journalist is likely going to want to know about your story. A general rule of thumb is that they will always want to know the Who, What, Why, Where, When and How. Knowing this means you can work out how to give them an answer to all of those questions in an impactful and easy to understand way.

4)    Decide what is the ONE main take-home you want people reading or listening to you to remember about the story you are telling. Write it down. Now, take out any jargon, anything technical, any acronyms and over-complicated phrases. Now simplify it. Now shorten it. And you’ll be most of the way there to having a punchy soundbite.

5)    A good way to move away from jargon is to humanise what you are saying. People respond most to stories that are about other people, that they can empathise with and relate to. Think about the human part of your story and tell it that way and you’ll be far more likely to use emotive and simple language.

Jo Willey Media is a content, training and communications consultancy. We provide tailored media training sessions to ensure spokespeople, academics and executives can effectively communicate with the media, delivering key messages with confidence and clarity to make the most of every interview opportunity. Contact us today and let’s discuss your training needs further.